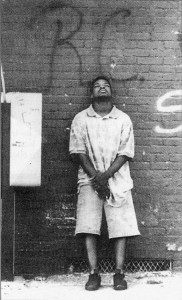 R.C. on the corner. Photo by Debra Gertler

From The New Republic, September 1997
Reprinted with permission.

I used to cover crime on the late shift in Baltimore for The Sun. It was a living measured, by and large, in four-paragraph installments. You’d call the cops, ask what was going on, and then, when they emitted a handful of facts about which body fell on which corner, you’d write it up briefly and send it to the night editor. West Baltimore, East Baltimore, lower Park Heights, Cherry Hill—the rowhouses and postwar housing projects were all decidedly similar, and, assuming the casualty was poor and black, the newspaper accounts were similar as well.

“A 21-year-old West Baltimore man was shot to death yesterday….”

“… police say the assailant fled on foot after the stabbing. No suspects have been identified.”

In four years, I manufactured about a thousand of those formulaic morsels. The bodies I wrote about were, for the most part, buried in a handful of $200-a-plot cemeteries and potter’s fields in South and West Baltimore. The newspaper accounts were likewise interred—page D2 in the Maryland-in-Brief regional wrap-up. The detectives who investigated these forlorn cases called them misdemeanor homicides.

I wrote a book about these detectives, and Barry Levinson, a Hollywood director who used to live in Baltimore, decided to turn the book into a network television show. A few months later, a film crew showed up and began ?lming. Cheap motels, broken rowhouses, projects, street corners — the same rotted Rustbelt terrain that had yielded all those stunted news briefs suddenly became a studio backlot. Eventually, I left the newspaper and went to work writing murder stories for the television show.

Not long ago, I was sitting in my living room, watching a taoe of an early episode of the show. It‘s one in which Robin Williams plays a tourist whose wife is killed in a street robbery. And somewhere before the second commercial break, when the pretend detectives are still trying to learn the names of the young men who killed Williams’s pretend spouse, gunning her down in the shadow of the real Oriole Park at Camden Yards, there is a scene in which a pretend drug corner gets raided. I knew the scene: in fact, I wrote it, and I had been on the set when it was ?lmed at a low-rise housing project just east of downtown. A pretend radio car turns the corner. A pretend lookout shouts, “Five-Oh.”  The pretend drug corner scatters, the touts and dealers and ?ends racing around the corner only to be trapped by the arrival of other radio cars. The police officers jump out. The corner boys are forced to the ground at gunpoint.

In a brief instant, I get a glimpse of Dinky, wearing the light-blue striped shirt he favored that summer. A make-believe patrolman orders Dinky to get down. I glimpse Tae in the background and R.C.—at least I think it’s R.C.—near the alley wall. A pretend detective yanks one of the kids off the ground. The kid is no one that I know; he has a line of dialogue and is therefore a union actor. “This ain’t right,” the guy says. “Talk to me,” says the detective.

The pretend criminal gives it up. The detectives will soon solve the case. The shooter will get life, no parole. The credits will roll. But, in the background, Dinky is cuffed and helped to his feet by another make-believe cop. It’s a ?eeting image, and the boy’s face is away from the camera, but I run the tape back two or three times, hoping for whatl can’t possibly see. He’s smiling, or not. It’s hard to tell.

The day this scene was shot was not without its peculiar charm.

“Sling drugs on a corner and get chased by the police.”

They looked at each other for a long moment. Then laughter broke on the Southwest Baltimore crossroads of Gilmor and McHenry. Tae, Dinky, Manny Man, DeAndre, R.C.—all of them were willing to leave their real corner untended for a day, travel across town and playact for the National Broadcasting Corporation. Only Boo was unsure.

“How much we gonna get paid?” he asked.

Forty-?ve dollars was ?fteen minutes’ work at McHenry and Gilmor. I knew this because, at that point, I had been around Tae and Dinky and the others for about ten months, and, for most of that time, they had sold drugs. I, in turn, had watched them sell drugs.

Boo stayed on the corner that day, slinging blue-topped vials of coke. The rest followed Tae across town to the Perkins Homes, a squat stretch of public housing that would serve as the pretend drug market. They ?lled out tax forms, waited out the inevitable delays and were eventually escorted by an assistant director to a battered side street. There, on die set, a props man handed them pretend drugs and pretend weapons, and the director, a very earnest white man, arranged them on the street in the manner most pleasing to the camera.

“You there, can you move to that doorway?”

Dinky stepped into the doorway.“And you—can you show some of the gun? Right. Tuck in your shirt so we can see the gun.”

R.C. arranged his shirt so the butt of the prop gun showed.

They ?lmed the scene over and over, with the director covering it from a variety of angles and distances. Each time, the pretend lookout shouted his warning. Each time, the corner boys ran from the approaching radio car. Each time, they were penned in the same alley, forced to the ground and given the handcuffs.

After the eighth or ninth take, the boys began to rebel.

“I’m sayin’ this is bullshit,” muttered Dinky. “They got all of us dirty like this. Dave, man, you know it wouldn’t be that way. You know we don’t do it like that.”

It was true. The props department had stuffed fake drugs and guns and knives into the pockets of all the extras. Every last one of them would be caught holding, every last one would, in the make—believe world, take a charge. At Gilmor and McHenry, it was very different. The boys worked ground stashes, handling only a vial or two at a time. They kept the guns in rowhouse vestibules or atop the tires of parked cars. They didn’t run at the ?rst sign of a police car. They didn’t have to run.

During the twelfth take, the boy playing the lookout sounded his alarm as he had the ?rst eleven times, but this time, the other boys didn’t play along. A few of them hesitated long enough to toss their fake vials and fake baggies into the gutter, as they would have in the event of real cops raiding their real corner. Tae dicln’t even bother to run. He stayed in the doorway of a vacant rowhouse, watching the police car roll past with a practiced indifference.

“What’s up, guys? Why aren’t you staying with the program?”

“We don’t do it like this,” DeAndre told him.

DeAndre tried to explain. So did Dinky. The second A.D. was sympathetic, but only in the real world can God exist in the details.

“It’s  just television, guys. I hear what you’re saying, but do it like we talked about, okay?”

With some reluctance, the boys agreed.

“Damn,” said Manny Man, walking back to his position. “This ain’t gonna look right. People in other cities gonna see this show and think the crews in Baltimore don’t know how to carry it.”

They did it a half dozen more times, just as the director wanted. They each got their $45, and they went back to McHenry and Gilmor. *

As things turned out, Boo was the ?rst to get shot on McHenry Street. It was a meaningless dispute with a Vincent Street crew, just one of those who-you-calling-bitch moments that accelerated. The ambulance took Boo to University Hospital with a collapsed lung, but he came back a week later and continued slinging coke. Some months later, he was shot to death by a 16-year-old girl, a hanger-on with the Vincent Street boys. The following night, Tae and R.C. were ambushed on McHenry Street. The emergency room  at Bon Secours Hospital tended to both and had them back on the corners in a day or two. By then, Tae and R.C. had both been playing with the product, smoking up as much as they were selling. In time, R.C. went to jail, got out, then went to jail again. Tae got caught with a sawed-off shotgun, violating the terms of an earlier probation. Last time I saw Manny Man, he was on Fulton Avenue, looking rough and dusted and like he was losing too much weight.

And Dinky? He was a great kid, really, a quiet one. You had to be around that crew for a while to get a sense of him, to know his heart. He managed a kind of honest innocence: even on a corner, he could surprise you with small moments. Six months after the boys became television actors, my son was born. A few weeks later, I rolled up to Dinky at McHenry and Fulton. He saw me, laughed and leaned into the passenger window.

He stood up, smiled again and looked down the street. A radio car crossed McHenry at Stricker. “How’s your boy?” ‘

“You got a picture?” I pulled out my wallet and found the photo. He studied it for a long while, walking around the car. At the driver’s window he stopped, handed it back and smiled.

Some months later, Dinky was standing at Hollins and Gilmor when two Terrace boys crept up and caught him. There was, at the time, some kind of beef between the project crew and the boys who were selling at Baltimore and Gilmor. Something about a Terrace dealer who got his Lexus torched. And Dinky happened to be standing on Gilmor when the Terrace boys made their pass. They shot him once in the chest, and he staggered a half-block to Baltimore Street, where he collapsed. He died at University Hospital. He was 17.
A neighborhood girl told me the story the following day. She said the family was looking for a photograph, something that would show Dinky as he was. She knew I’d used a photographer during the book research.

“They need something for the funeral pamphlet,” she said. “I guess they just don’t have too many pictures of him.” I told her that the photographer had no pictures of Dinky.
“Dag,” she said. “Nobody even got a picture of the boy. Ain’t that sad?” I knew of one image, of course, but said nothing. At that point, the joke of it seemed especially unfunny: Dinky, slinging drugs; Dinky, going to the ground; Dinky, preserved for the purposes of television entertainment, snared in a moment of celluloid fakery.

Dinky’s death was a brief in the newspaper. Three paragraphs, no byline, buried inside the local section.

The burial was at Mt. Zion, a cheap cemetery at the southwestern edge of the city.

DAVID SIMON, a Baltimore writer, is the author of Homicide: A Year on the Killing Streets, which is the basis for the NBC television show. His second book, The Corner: A Year in the Life of an Inner-City Neighborhood, co-authored with Edward Burns, will be published this month.